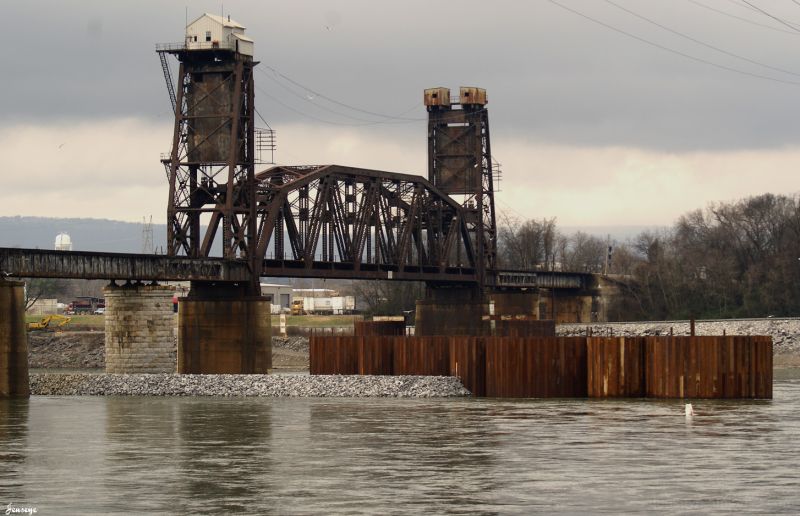 Posted by Jen (Alpharetta, United States) on 3 January 2009 in Landscape & Rural and Portfolio.

Decided this morning to add a little history for everyone:
From Wikipedia, the free encyclopedia

The original span was a swing span with a center pivot that was originally built in 1887. It was replaced by a vertical lift span in 1920. It remains a very busy crossing on the Cincinnati, New Orleans and Texas Pacific Railway, a major subsidiary of the Norfolk Southern Railway. The bridge carries two mainline tracks across the river.

The bridge is one of only three known nesting locations in Tennessee for Peregrine Falcon, a Tennessee and Federal Endangered species.

That has to be really huge. It has a house on top of one of the pilars. You can say that someone is living above the bridge.

@João Mourão: I assume that is some sort of work house on top.

I like the mechanicals in this one, Jen . . I take it that arch section can be hauled up to let stuff under ?

@Ronnie 2¢: I guess...there was no working that day.
I added a bit of history to the post this morning for everyone.

Look at the old lift bridge! How cool is that?! And so well framed by the shooter. Well done.

@MontereyJohn: I added a little history to the post this morning!
I would have loved to get on the bridge and shoot, but I had to settle for below the bridge instead.
Thanks John!

This is warm and lovely! Thank you for sharing the info, too!

Yes, I moved. And yes - I didn't like the moving part but I love where I live! They have tall, aged trees (pine & otherwise) that I love!

@Photographs by M.E.: Glad you like it! Good Luck!

Wow, this is a great shot and wonderful information to go with it, Jen!

EYES WIDE SHUT from The library of my soul, United Kingdom

very good shot, I like very much the subject. Congratulations