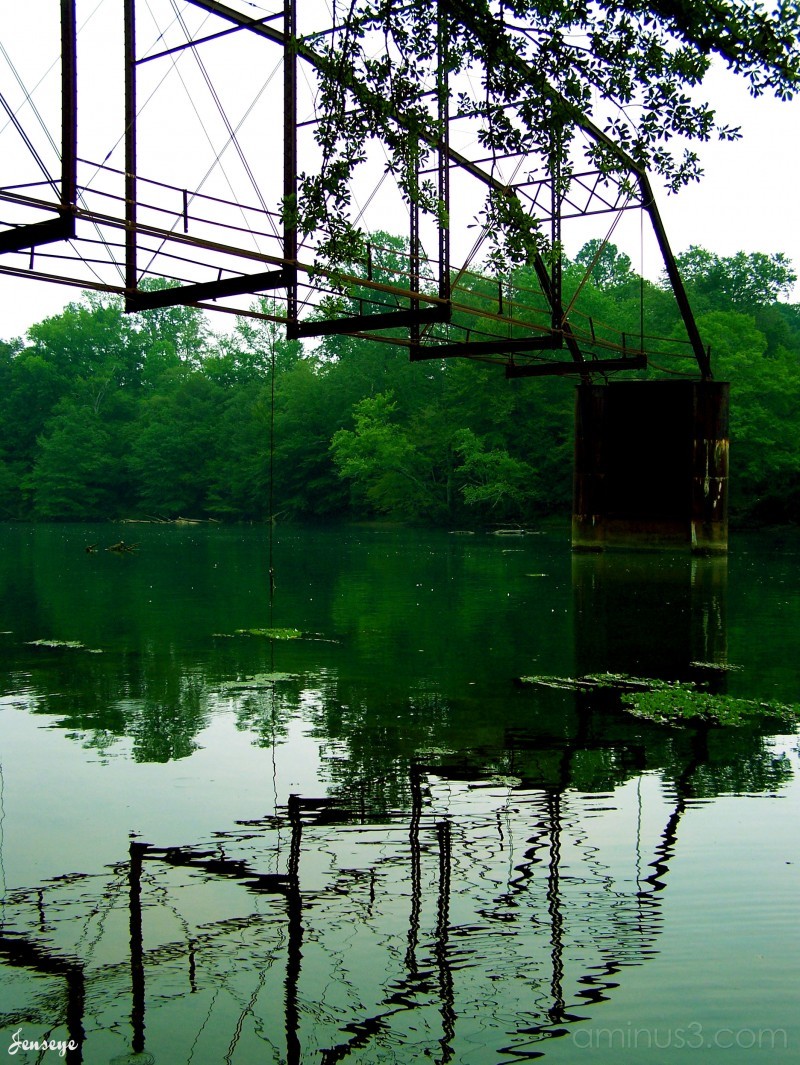 Posted by Jen (Alpharetta, United States) on 16 August 2007 in Transportation and Portfolio.

Jones Bridge is named for the structure that for nearly 20 years (1904-1922) spanned the river in this area. Prior to that time Jones' Ferry or Martin's Ferry would take people across the river at this point. With the roadbuilding activity in the early 1920's the private toll bridge was made obsolete by no-cost, state-funded bridges. Over the next 20 years the bridge fell into disrepair. In 1940 half of the span was "stolen" by an unknown group of men, possibly for the salvage value of the metal. The remaining half still stands at the east end of the park (at this point the Chattahoochee flows roughly east-to-west).

@Viewfinder: I know...I thought after all these years that someone would restore it, or at least convert it into a walking bridge to get from one side to the other???
Thanks VF!

@Dawn Sutherland: Thanks Dawn...it crosses (or rather what's left of it) the Chattahoochee River where there is alot of tubing, kayaking and some great fishing.

i love the distortion of the bridge in the water. this is gorgeous, i'll have to visit it some day.

The Frame from Visakhapatnam, India

Great shot. If you could have a clear blue sky, it would highlight the bridge.

@The Frame: I have to go back when the sun cooperates (oh and it's not soooooo HOT, it's been miserable here lately!)
thanks for the visit and comment!

@tyan: I will have to look into that...great idea Tyan!

Wow, that green is so brilliant. It reminds me of the cool green days of springs. Thanks for bringing that back to me because it's been in the 100's where I'm at for nearly a week! Blah! =-)

Lovely shot! I love the vivid greens and the reflection in the water. Did you created the small ripples in the water, or were those there naturally?

@Michael Keith: They were naturally there...thanks!

Nice reflections. I like the greens. Also, interesting story. They took half the bridge. WoW.

@Nick: Can you believe that? Apparently it happened one night and the surrounding neighbors just thought they were working on the bridge and never called anyone.

The reflection of the skeleton brige is wonderful, you've captured it's mystery perfectly! great shot :)

Great find Jen ! fantastic shot ..... the greens are very nice in this shot ...lol.... and yes it would be a great idea for a walking bridge on this structure :o)

@RoBeRt: Thanks Robert...I just wish they would something with it other than just let it continue to rust!

I could use an entire memory card here. Beautiful shot.

@Angry Buddha: Not a whole memory card, but quite a few.
I want to go back in the fall and get a wonderful backdrop with the changing leaves.
Thanks!

very, very well done! I could hang this on my wall...

The water is so calm and the reflections are so perfect. Great shot!

i like the lush greens..also the reflection of the bridge. goos shot..